Conference 2019 – Beyond the Pale: Boundaries and Borders in Ulster Local Studies.

Given the upcoming centenary of the partition of Ireland and the renewed focus on the Irish Border issue due to  Brexit,  this year’s conference looked at the general theme of boundaries and borders in Ulster local studies.

With thanks to the Cardinal Tomás Ó Fiaich Library & Archive for their support.

Digging the Dorsey: a giant enclosure on Ulster’s ancient boundary.

Boundary Places and their Names

(a range of book stalls were available to delegates over lunch)

Intricate Difficulties and Intractable Problems: Tyrone and Fermanagh in the Boundary Question 1912-1925.

The Irish Border: an ethnography of place.

THE REFORMATION Then and Now: Perspectives and Change 1517-2017 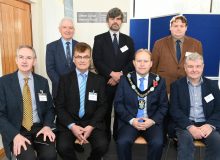 With lectures and open discussion, the Conference explored the historical narrative relating to the Reformation and recent research, with the objective of examining the unique legacy of the Reformation in the world of today, particularly in Ireland.  A total of 70  persons attended and were warmly welcomed to Armagh by Gareth Wilson , Lord  Mayor of Armagh City, Banbridge & Craigavon Borough Council.

The opening lecture was  delivered by Professor Alan Ford, Nottingham University, who addressed  issues surrounding the interpretation of the Reformation in Ireland. Dr. Brendan Scott focused on how the Reformation brought upheaval to south Ulster and North Leinster. Many individual bishops were caught up in the tsunami of change, among them Archbishop Creagh of Armagh (1523-1586) who has been described as a “prisoner of conscience”. His contribution to history was outlined by Professor Colm Lennon of Maynooth University. The new medium of printing helped spread Luther’s message. Glynn Kelso of PRONI gave a presentation on a collaborative project on the Reformation being undertaken by PRONI and LibrariesNI.

Proceedings in the afternoon featured a panel discussion which included Dr Henry Jefferies, Associate Member of the AHR Institute, Ulster University who has published extensively on the Reformation and the Rev. Tony Davidson, First Presbyterian Church, Armagh in addition to the the above speakers.

Since 2001 the Trust has organized eight  conferences to address important themes in local and national history.

The first three conferences examined the heritage of townlands, the significance of border landscapes and the concept of migration both today and in the past.

The papers read at these conferences have been published

The papers preserve the work and impact of these events.

The proceedings of  the two previous  conferences “Plantation: aspects of 17th century Ulster Society”, Brendan Scott and John Dooher (Editors) have been published in partnership with the Ulster Historical Foundation.

The 2012 conference examined the decade of anniversaries with the title

In 2015 the theme of the conference was “The Border Counties and the First World War” and covered a range of subjects including, nursing, recruitment, refugees and war poetry.